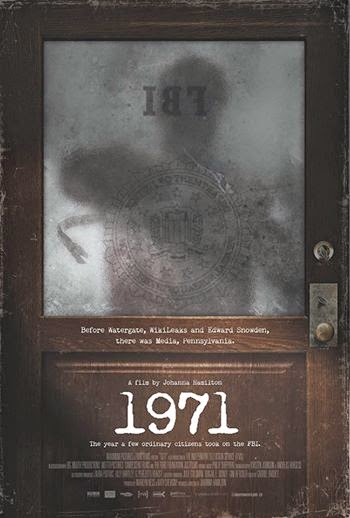 "1971" is a powerful story about a pivotal event that I was unaware of.  In 1971 a group of citizens calling themselves "The Citizens Commision to Investigate the FBI" broke into an FBI office and stole documents. These documents proved that the FBI was spying on their own citizens.  Sound familiar?  Well the movie couldn't be more topical in the age of WikiLeaks and Edward Snowden.  It raises the questions were they heroes or just criminals.  Their actions predated Watergate and in some ways probably helped pave the way for the Watergate scandal.

The event in question was the break in at an FBI Field office in Media Pennsylvania.  A group of citizens that were never caught stole the files and anonymously mailed them to various newspapers.   What was the FBI doing? Well they were spying on citizens.  They had undercover agents in different groups that they felt might be "anti-America".  Groups like the Black Panthers, Anti War groups, Women groups, and hippies.  Not only were they spying on them but they were attempting to disrupt the groups by spreading rumors and making people feel paranoid. This was at a time when the FBI had very little or no oversight and a lot of public support.

How did "The Ctizens Commision to Investigate the FBI" get their start? Well before the became the commission they were a group of anti war demonstrators in Philadelphia.  They heard about an attempted break in at an FBI office in Rochester NY.  That break in was stopped and that group was arrested.  What the group in Philadelphia decided to do was break into a field office that had very little security.  They also decided to do it on the night of the Muhammad Ali and Joe Frazier fight of the century so most people were distracted.  Their success was largely due to their thorough preparations and good timing.  What they did not know till much later was how big of an impact they would have on the country.
The Washington Post was the only paper that had the courage to publish the files.  Nothing like this had happened before and since the files where stolen all the other papers decided to give them back to the FBI.  But the Washington Post decided that the info in the stolen papers were too important not to publish.  After they were published Anericans and politicians were shocked by what they found out. And the FBI went on a giant manhunt to capture the people responsible. But they were never caught.  The members remained a mystery till now when they decided to tell their story.  And what a story it is
The documentary has interviews with the members along with home footage they took and reinactments.  It is expertly put together to tell their story.  The recreations are seemless and really helps you feel the tension.  The story of Bonnie and John Raines is one of the more powerful stories in the documentary.  While most of the other members were younger Bonnie and John were married and had children.  They knew if they got caught they would go to jail for a long time and leave their kids parentless.  The fact that they still chose to do it is amazing and kind of unimaginable if you are a parent. Their decision adds another level of intensity to the story and keeps us on the edge of the seat. The movie also has tons of humor that breaks up the intensity and makes the whole experiance a fun ride similar to a Hollywood thriller.
In the end their actions opened the eyes of the country and the government.  Congressional hearings were formed and J. Edgar Hoover's unquestioned authority came to an end.  The FBI now had to follow stricter rules and Congress formed an oversight committee.  These rules stayed in place till the Patriot Act repealed some of them.  We now live in a time when we never know who is watching us.  It makes you pause and reflect on how far are we willing to let the government go to make us feel safe.  It was pointed out that them not ever being found probably helped the story stay focused on the FBI and it makes you wonder if Edward Snowden would have had better success if he had remained anonymous. Instead of hearing where he is hiding maybe we would still be talking about what he revealed.
Bonnie and John Raines were in attendance at the screening and did a Q&A at the end. It was interesting to hear them talk about what they did and how difficult their decision was. But their views on current events was the most interesting. They see Snowden as a modern day hero. One of the quotes from John was"A nation governed by fear is a poorly governed nation".  Basically citizens should not feel like they are constantly being spied on.
Overall 5/5-a great documentary that plays out like a thriller.  Keeps you on the edge of your seat and laughing.  Not only that it teaches you a history lesson and the power a few people can have.